Attention: All four CIS Thrift Shops are open and ready to help you find great deals! For exact location hours, click the Thrift Shops link in the side or drop down menu, or visit cisbrunswick.org/thrift-shops. We’ll see you soon! 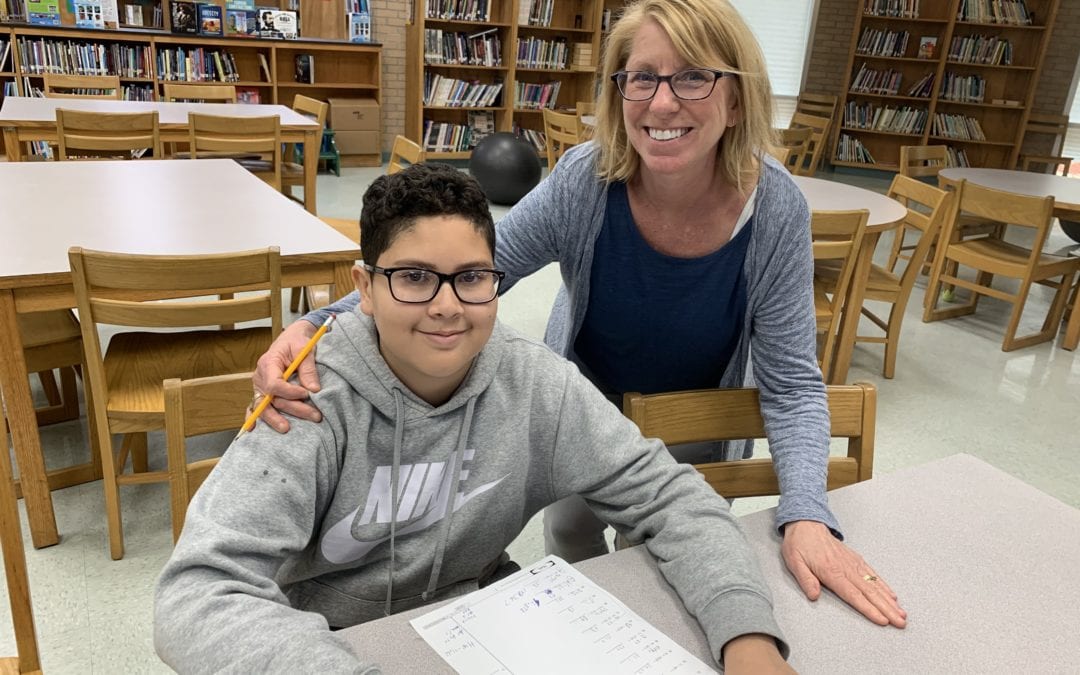 Michael Funez is a 6th grade student at Shallotte Middle School. He was referred to the Communities In Schools of Brunswick County Action for Success (CIS AFS) by his elementary school teacher for academic and behavioral concerns before coming to Shallotte Middle. He lives with his mother, grandmother and older brother. His mother is very supportive of his education and a good advocate for him. Michael has ADHD and is on the higher spectrum of autism. Michael struggles to control his anger and emotions. When meeting or interacting with Michael, he is very likable and sweet.

Michael and his CIS Math tutor.

Michael started his CIS Action for Success individual support plan with Michele Rau, CIS Success Coach at Shallotte Middle School. He receives Math tutoring and mentoring from CIS to help with conflicts that he might have in school or at home. After a few mentor sessions and CIS monitoring, it was noticed that Michael’s negative classroom behaviors were increasing. He received his sixth referral for CIS Peer Court for fighting. Ms. Rau wanted to make sure Michael was surrounded with support and worked with his school counselor to hold a parent meeting to address Michael’s behavioral issues and concerns. A behavior contract was created for Michael and his CIS sessions were increased to assure that he was staying on track. He attended Peer Court and is working on completing his sentencing requirements. Since the last Peer Court referral, Michael has had only one minor occurrence and received no other referrals. Michael maintains a good attitude and is working to be successful and make his mother proud. His grades have improved from first quarter D’s and F’s to having two B’s and not failing any classes in the second quarter. One of Michael’s B’s is even in Math! Michael is a successful young man and CIS is proud of the better choices he is learning to make as he matures into a stronger student.